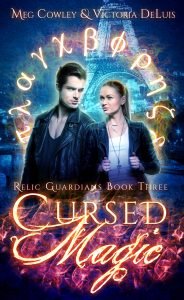 My long overdue study of translation runes and the power of tongues over the past month had paid off. Using my spells, I could decipher every word on Pandora’s Box, or rather, the copy of them I had taken.

I might have been inside the most secure archives in England, deep within the London Magicai Library, where few were permitted to tread, but it would have been more than foolish – catastrophic, even – to bring Pandora’s Box through the heart of the city. It was secure, where it belonged, at the Great British History Museum.

The tension in my stomach did not ease, however.

No, it brought me no joy to translate these glyphs. My skin was cold as I read them, though it was warm – stiflingly so – down here. They foretold doom, should the box ever be opened: plagues upon the world of sickness and ravages against all good and whole until the earth lay in ruin and wreck.

I remembered how it felt to hold it in my hands, as if the malevolence inside leeched out and bleached the life from me, poisoning me.

I shuddered. I was really glad the box was no longer in my care, to say the least. I knew as I sat there researching it, my boss, Duncan, would be placing it under wards beyond my knowledge that would keep it safe, secure, and most importantly, unopened.

At least, I thought he would be, but at that moment, my phone rang and his name flashed on the screen. I answered the call within a second; as much to silence the loud ringtone in the silent archives as to find out why he called.

“What’s up?” I said, startled by the shaking of his voice. Not fear, not upset, but anger it seemed.

“We have a problem – a huge problem.”

Cursed Magic is the third book in the Relic Guardian series, you can find it here!