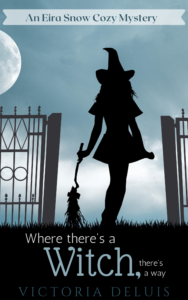 As many of you know, amongst other projects, I have been working on a new paranormal cozy mystery series, following witch, Eira Snow, as she starts a new life in Caerleon following her divorce.

Of course, things never run smoothly, and Eira soon stumbles onto a murder.

Check out the (unedited) first chapter of  Where There’s A Witch, There’s A Way  below:

As a witch, I’m used to the strange and unusual. It comes with the territory. Still, it’s not every day you stumble across a dead body. But there she was, as plain as day and as dead as a person could be. There was no point checking for a pulse. The angle of the poor lady’s neck told me there was no hope.

I pulled my phone from my bag, called the police, and waited for them to arrive. While I did, I couldn’t help but notice the woman to be around the same age as me. Thirty-seven was far too young to die. Other than in age, we didn’t look that much the same at all. We were both tall and slim, but it was hard to judge her height given the circumstances. Her hair was bobbed and perfectly styled, her lips ruby red, whereas I tended to opt for minimal makeup and had long curly hair that had a mind of its own. Her dress was shorter than I’d ever dare to wear. Not that you’d find me in a dress at all these days. Conscious of my recent divorce, my gaze drifted to her hand searching for a wedding band, instead, I noted her manicured fingernails were painted to match her lips and clinched tight to a piece of paper.

I shifted position and tilted my head to try and see what was written on it. My heart almost burst when I realised it was a poster, begging for information in relation to a lost cat by the name of Abby. A white floofball with a black tail and a few black patches on her fur. I grabbed a pen from my bag and used the end to push the paper straighter, and almost fell on top of the poor woman when I gasped at the size of the reward offered.

Deciding it best for my prying to come to an end, I backed towards the front door and away from the body. The sun was slowly setting and burnished the sky in a rich blend of orange and crimson, casting the dark hallway in a macabre light.

“Was Abby your cat or one you found?” I pondered out loud and shivered when a blast of air as cold as the depths of winter hit me.

A well of dread built inside and the hairs on the back of my neck stood to attention.

I gulped in a breath and tried to calm my racing heart whilst turning to look. The dead woman’s spirit, dressed in the same black mini-dress and impossibly high heels as her body, stared down at me from the top of the stairs.

All moisture left my throat, and I could barely form a coherent thought, let alone speak.

The ghost took each step towards me with agonising slowness, her phantom footsteps making no noise on the redwood stairs. Fear glued my own feet in place, and all I could do was stand and gape.

This wasn’t my first encounter with a ghost. There was a time or two as a child when I’d tried to convince my father I’d seen one. Both times, the effort earned me a smacked bottom and a two-week grounding. That was all the lesson I needed. If you ignore something long enough, it’s almost like it disappears. Just ask my ex-husband, Chris. To him, I was practically invisible, as a woman anyway. But ignoring the ghost that edged closer and closer proved impossible with the icy touch of her presence and the deathly stare of eyes that never blinked.

“I-is she missing?” I finally managed, my voice barely above a whisper. I sounded like an idiot. Of course, the cat was missing. I’d learnt that from the flyer not five minutes ago.

Before she had the chance to answer, two sets of blue flashing lights appeared outside, and in the blink of an eye she vanished.

I stepped outside into the ever-darkening sky to greet the police and found myself in a flurry of activity. A plain-clothed officer turned on the outside light and started grilling me beneath its glare. She stood a couple of inches taller than me in a fitted navy suit. She had a warm and sunny touch to her face like a citrine gemstone, although that might have been the light. Her blonde hair was tied back in a simply low pony. The colour looked natural, but as I placed her around five years older than me, I surmised it couldn’t be. I’d been dying the grey from my hair for a good four years and had no doubt she did too. Despite her questions and business-like manner, her blue eyes shone with caring.

“No, I don’t know who the deceased is?” I said in answer to her latest question, trying hard not to roll my eyes with her third time asking it.

“Then why are you at her house?”

Once again, I pointed to the neighbouring house, and explained how I’d noticed the open door whilst delivering a package to its owner.

I’d only recently moved to the quaint village of Caerleon in South Wales and opened Crystal Magic, a spiritual shop located down the road from the Roman Fortress and Baths, and I was keen for the locals to sample my concoctions and reap their benefits. Although I had a good income from selling my remedies online and didn’t need to rely on foot traffic for my trade, I couldn’t think of a better way to become a staple of the community and meet new people than running a physical store.

Samantha Jenkins was my one and only customer to dare. She was a small grey-haired woman with glasses, carnelian-red kissed cheeks, and a homely look about her. She’d popped into my store just before closing and purchased a smudging kit.

“I know your remedies are for humans, but do you think you could whip something up to calm my neighbour’s cat? The poor thing is terribly anxious,” she’d said as she was leaving. “I’ll be out, but if you could pop it over later and leave it on the doorstep under the porch, I’ll send my son round tomorrow to pay for it.”

Yeah, no problem at all. Of course, I didn’t have to investigate when I saw the open door. That was all on me.

I’d soon found Mrs Jenkins’ modern detached house with the green garage door from the directions she gave me. Baskets filled with daffodils hung either side of the front door from the porch that covered it. As instructed, I left the oil on the doorstep and turned to go home, wondering which of her neighbours had the stressed-out cat.

As I left her drive, I looked at the other houses in the area. All were of a similar design: detached houses with built in garages and dormer style windows in the upstairs. There were only around twelve of them, and it was clear they’d all been built at the same time as part of a development. It was then that I noticed the door on the house to the right of Mrs Jenkins’ was ajar.

I stopped short. The house was practically screaming out to me with alarm bells sounding in my head. I stood and stared at it for a few minutes, looking for any sign of movement. The air felt strange, as though it compressed around the house in a cloud of anguish. I shivered and clutched my handbag tighter. There was nothing good about the open door, of that I was certain. I pushed my shoulders back and steeled myself before entering the garden and edging towards the door, calling out, “Hello,” in the process. Dread built like a kick to the gut with the unwavering certainty of what I’d find inside. The sensor light flared to life almost blinding me, but I continued.

I stood under the glare of that same light now and explained everything to the detective. Well… not everything. I fully intended on keeping the bit about the ghostly apparition to myself.

She eyed me wearily as though she sensed I was holding something back. “I’m going to need your name and address,” she said after a moment. “And I’d like you to give a statement to one of my officers.”

“Of course. I’m Eira Snow.” I perked up, thinking I may get home some time tonight, after all. “Might I ask your name?” I said, resolved to the idea that this wouldn’t be the end of my discussions with the police.

“Detective Inspector Kate McIntyre,” she answered before waving another officer over to take my details. She left to see inside the house without so much as a backward glance.

I shivered as the first drop of rain hit me square on the nose. Great! My shoulders slumped and I glanced up the road. A glass of gin was calling. As I wistfully wished to be home in front of the TV with a glass in my hand and my cat, Niles curled on my lap, I noticed a flash of white jump on the garden wall and dart with lightning speed inside a bush.

Now available on Amazon and in Kindle Unlimited.