You can now enjoy the complete Relic Guardians series in one action and magic packed volume! 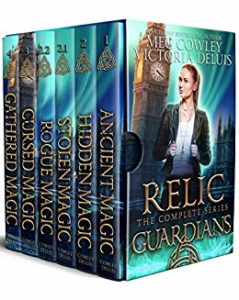 Magic is real – but you knew that, right?

I’m Zoe Stark, and the last thing I need after saving London from a possessed African mask is the theft of another magical artefact – one that’s far more deadly.

When Kukulkan’s Skull is found and promptly stolen, it’s up to me to recover this legendary relic before its demonic powers are unleashed upon mankind.

With the Day of the Dead, and the zenith of the skull’s devastating powers fast approaching, I’m out of luck and out of time.

Not knowing who to trust or where to turn for help, it’s up to me to save the world, but first, I have to save myself.

I’m Nathan Scott. I’m a city guy, born and raised, but I’ve seen more than my fair share of the world – and not just this world. I’m a Traveller. You wouldn’t believe how many Englands I’ve seen.

When I receive a magical distress call, I cross the desert to help. Who wouldn’t do the same for an old friend? Although, as it turns out, it’s me that needs help and not the other way around.

With a crazed megalomaniac on the loose with a seemingly insignificant stone that can destroy the world, I’m up against the clock.

Luckily, I have more than one friend who can help.

One rogue decision. One grave mistake.

I’m Jamie Oxford. I meant well, honestly, but my best intentions never seem to end well.
Magical artefacts are disastrous in the hands of non-magical Ordinaries, but in the hands of power crazed Magicai..? It doesn’t bear thinking about. What have I done? I could kick myself for being so stupid..

I know I’ve messed up. I’d like to say it wasn’t the first time, and that it would be the last, but, well… you know how things are. When you walk the line of life and death, right and wrong, mistakes happen. Admittedly, this is my worst.

This one could end the world. No exaggeration.

I’ll fix my mistake. I just have to figure out who to trust first.

If Zoe finds out, she’ll kill me, but maybe she’s the only one who can help.

‘Hayley Bevan, Magicai, Traveller’. Not something I thought I’d want to be, or even knew existed, but here I am, desperate to come to terms with my new found powers – and all that they
have shown me.

With Nathan and Zoe to guide me, I’ll face whatever the future holds, but can I face the prospect of losing them, or myself

That’s what it might take to defeat him. I’m not sure I’m prepared to do that – or that I can.