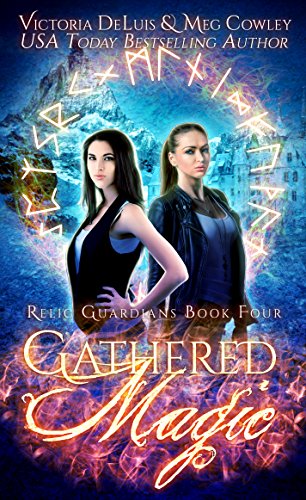 ‘Hayley Bevan, Magicai, Traveller’. Not something I thought I’d want to be, or even knew existed, but here I am, desperate to come to terms with my new found powers – and all that they have shown me.

With Nathan and Zoe to guide me, I’ll face whatever the future holds, but can I face the prospect of losing them, or myself? That’s what it might take to defeat him. I’m not sure I’m prepared to do that – or that I can.

“You said at Tom’s that you could open a doorway to the same location as Davenport’s men.”

“I did,” I said, remembering Nathan’s confusion at my statement.

“Normally, the art of opening doorways is handed down from Traveller to Traveller. I learnt from my father, and he learnt from his father, and so on. My father would open doorways for me, I would step through and learn the look and feel of each location.” Nathan scratched his chin. “Travellers can’t open a doorway to a place they’ve never been shown.”

“Well, that’s ridiculous. If that were the case, how were the doorways opened in the first place? How would new worlds be discovered? Besides, the first portal I opened was to a world I’d never visited, and I opened one to Mount Kailash just using photographs of the area.”

“Hundreds of years ago, there are records of Travellers being able to open a doorway to an unknown destination, but none are known to exist now.”

“We can open random doorways without knowing where we’ll end up, but tend to avoid such acts. Who knows what sort of world we’ll end up in, or where in that world we’ll be? As a rule, we stick to creating portals to the worlds we know.”

Nathan shook his head. “Not at all. I’ve just never seen it.”

I looked around the cemetery to make sure that no-one was watching. The wind rustled the flowers and the chaffinch watched from the tree, but everything else was silent.

“Then you want me to show you I can.” I raised my hand, ready to call the magic of the ley lines and open the doorway to Davenport’s world, but Nathan stopped me.

“Let’s practise on a few other locations first,” he said.

“Okay, where did you have in mind?”

Nathan shot a blast of energy from his hand. A portal momentarily split the air, before disappearing. “How about there?” Nathan said.

I smiled and opened the portal again. Nathan disappeared into the doorway for a moment, then returned, and shaking his head.

He stood there for a while, a frown on his serious face. He crossed, and then uncrossed his arms. It was hard not to laugh at the clear signs of the fight he was having with himself. After a moment, he shook himself and opened another doorway. Again and again, he repeated the act: he opened and closed a doorway, I opened it again, he popped through, and came back each time with a look of bewilderment.

“It shouldn’t be possible,” he said after I’d repeated the task eight times. “Every time, the exact location.” He paced back and forth, and I could practically see his mind working through unknown implications. “Open one to a random place. Somewhere you’ve never been before, and somewhere you’ve never seen a portal open to.”

I raised my hands and thought about what he’d asked. I stood there, trying to think of where I could open a doorway, but nowhere came to mind. “How about the Clendy Stones back in Switzerland?”

“Have you ever been there?”

“Yes. A long time ago, but I’ve never opened a doorway there.”

“Then, no. You’re over-thinking. Just reach out and open a doorway, don’t focus on a location or a known feeling. Open a random doorway.”

I drew more and more power from the ley lines into me, but try as hard as I could, I was unable to do as Nathan asked.

Nathan’s reply was to continue pacing.

“Can you?” I asked, frustrated by his actions. “You said it was dangerous.”

With a flip of his hand, Nathan opened another portal. “Done,” he said, then closed it as if it was of no matter. I didn’t doubt that Nathan had done as he’d said, but I did wonder why something so easy for him seemed impossible to me.

I gritted my teeth.

“I think you should open the doorway to Davenport’s world.”

“Now? Don’t you think we should wait for Zoe and Jamie? They should be here any time.”

“Sure. It won’t hurt to make sure you can do it from here. It might be you need to be in the same location as you saw the portal opened from. That’s something we haven’t been able to test.”

Gathered Magic is the fourth and final book in the Relic Guardian series and can be found on a number of retailers!