A Cat, a ghost, and a zombie walk into a bar… 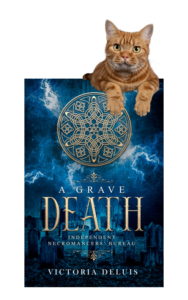 Some jobs are worse than others . . .  Zombie control was high on that list.

Tonight’s rounds, though, would change everything.

An agent for the Independent Necromancers’ Bureau, Cassie spent most of her nights chasing ghosts, undead, and rogue necromancers. She wasn’t ready for what she found.

He had been a friend and mentor.

Who would have killed him?

In her bag of tricks, she could speak to the souls of the dead. Cassie was determined to solve the murder. What she discovered next, chilled her to the bone.

It was worse than murder.

Someone had severed his soul.

With no way to communicate with her late friend, she’s got her work cut out for her. There are dark forces at play.

You’ll love rooting for the brilliant Cassie, because she’s not only a strong woman with a snarky personality, she has a cat.

Look out for the rest of the series coming soon!

This is the first series I started to write and it has a weird yet special place in my heart. I will finish it, but I tend to put a lot of pressure on myself with this series so it will take a little while 🙂

Find out how to get both short stories for FREE when you sign-up to receive my newsletter!

Cassie Dune is an agent of the Independent Necromancers’ Bureau and the most powerful necromancer in the Northern Hemisphere. She lives in a world of myth and magic, where ghosts pop over to cook her breakfast, and zombies terrify the living.

In Till Death, when some uninvited guests show up at a wedding, Cassie must fight to stop them. With the aid of Detective Inspector Luke Baron, she works to overcome a rampaging horde of zombies before it’s too late. An act that causes her to learn more about her power and its origins.

When Dylan turns up at Cassie’s house just before sunrise in A Matter of Death, she knows something is up. Anything that bothers a two-hundred-year-old ghost, is sure to be bad news for Cassie. A necromancer has imprisoned the spirit of Dylan’s friend Elizabeth. Can Cassie find her and save her soul? 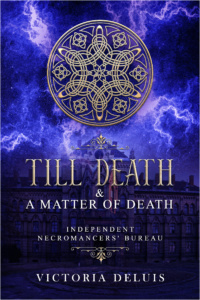 If you’re looking for a couple of fun, action packed mysteries with a touch of humour, then these short stories are for you.