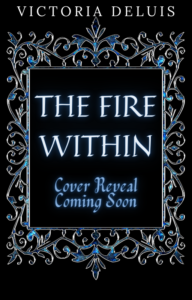 The Fire Within is a newsletter serial.

I will post chapters as I write them and let you know when they are here in my monthly newsletters (although feel free to check back at any time as I may write more than one a month).

You will be reading a pre-edited version of the story, so there may several mistake and the events might change.

Six Chosen. One Dragon. No Choice.

Taken as a child and raised to be a fierce warrior with no connection to her past, Seren is first among the five Chosen sworn to protect humans from the dangerous creatures who invade her world.

Living with the knowledge that one day she must make the ultimate sacrifice and give her life to seal the rift between worlds and grant her people a two-hundred-year reprieve from vicious attacks. Seren never doubted her path, never questioned her destiny, until now…

Can Seren overcome the creatures of the void and save her people?

Will she meet her fate?

Will her world or that of the dragons survive if she doesn’t?

Light burst from the drac-stone in the centre of the domed chamber. Though dozens of torches lined the walls, Seren had never needed their light to brighten the space. Even when she was a young child and her powers were yet to develop, the stone responded to her presence and flared like the setting sun, enveloping the room in a brilliant sheen of orange and red. It sensed the potential in all the Chosen, but it never shone as brightly for anyone else as it did for Seren, and today it flared brighter still.

She huffed out a breath and moved around the chamber studying the etchings on the surrounding walls as she had countless times before. Monumental dragons sat on powerful haunches, poised with wings spread, ready to take flight. Their horned heads loomed, menacing and repressive, a constant reminder of the magic needed to seal the rift between Seren’s realm and that of the Dreigiau.

Seren shuddered, wondering how she had ever found comfort in them, how she ever imagined them as watchful guardians. As she turned away from the walls, she adjusted the green shawl draped over her shoulders and reached towards the drac-stone. Rays of light danced between her splayed fingers, and a tingling sensation filled her chest with a mixture of dread and awe.

“You, I’ll miss,” she said to the stone. “Even with the beasts circling, ready to pounce, you’ve always made me feel safe.” She gave a wry laugh and pulled her hand away. “Though, just once, I wish you’d allow me to see you the way those not of the Chosen do. I haven’t the faintest idea what you truly look like. Are you grey, like flint, or do you glisten like crystal?”

The shadows shifted and drew her gaze to movement from the left. A figure stood hidden in an alcove, shielded from view by one of the four pillars supporting the vaulted ceiling.

Seren’s heart raced in alarm, quickening her breath, but she stood ready to fight should the need arise.

“It looks like a white opal,” a masculine voice said as the figure stepped forward.

“Who are you?” Seren had lived in the temple for as long as she could remember. She knew every soul that walked its halls, The man before her was a stranger. “By what right are you here?”

“I’m sorry.” His deep voice echoed around the otherwise silent chamber. “I didn’t mean to startle you.” Dark hair flopped over eyes that reflected the crimson light as he edged closer. He was young, not much older than Seren, but a strength radiated from his being, and he stood with the confident ease of one born to command.

Adrenaline coursed through Seren as she gathered her power and readied to release a sphere of pressure to push him away. The drac-stone reached out to her, flooding her with more energy should she need it.

“No, wait,” the man said, as though sensing the ripples of magic in the air. A twinkle shone in his gaze as it moved down her body and took in her readied stance. “I’m Trilian. I mean you no harm.” He bowed and stretched his arm out in greeting. “Seren, I presume.”

“That’s the first of my questions answered,” Seren said. Keeping her magic close, Seren eyed him with suspicion. “But you have yet to explain your presence in this chamber, and how it is you know my name.”

“Lady Branon directed me here to await your arrival.”

“A likely story, considering she had no knowledge that I would come.”

“Indeed, I had expected her to arrive with you.”

Seren raised an eyebrow. “Then how is it you know who I am? I’d remember if we’d met.”

Trlian smiled and nodded towards the drac-stone. “It radiates for you. From what I understand, no other elicits quite the same response.”

He reached his hand forwards again, urging her to shake it. With the comfort of the stone providing reinforcement to her magic, and the knowledge even one born to command was no match for her power and training, she accepted.

Sparks tingled along her fingers and up her arm at the touch, and she almost pulled away. Instead, she held firm and looked him in the eye, secure in the knowledge that the light from the stone masked the flush that crept across her cheeks as warmth flooded her body.

“The drac-stone looks like an opal,” Trilian said again. “Even to those without power, such as your own, it is beheld as a thing of magic. Every and any colour ripples beneath its surface.” With Seren’s hand still in his own, he took them a step closer to the stone. “Do you know what it’s made of?”

“It was a gift from the Dreigiau. It stores their magic and helps us develop our own.” Trilian looked at her as though she was a simple child. She bristled and pulled her hand away, debating whether to blast him with a ball of energy to put him in his place, even if Lady Branon had allowed him to be here. “Do you know what it’s made of?” she asked instead, unable to keep the scorn from her voice.

“Of course. It’s made of the tears of a thousand dragons. Each of the Dreigiau sacrificed a drop of their magic to create the stone and guide the children it finds on their path.”

Seren scoffed and shook her head. “The beasts do not cry.”

“Are they not the friends of humanity? Did they not work to save this world from the creatures of the void?”

“They worked with us to save both our worlds. A mutually beneficial arrangement. But they demand a high price in return. What price do they pay?”

Trilian reached out and placed his hand on the drac-stone. Seren’s breath hitched at his audacity, but her eyes fixed on the stone as its blinding light faded. Darkness flooded the chamber, but a play-of-colour danced beneath the surface of the stone, shifting in intensity from bright fiery red to an incandescent white.

“This is the price they paid,” Trilian said, “and it cost them more than you can ever understand.”

He pulled his hand from the stone, which returned to its previous state and filled the chamber with all the light and warmth of the sun. Seren turned to Trilian, ready to ask him a million questions, but paused when a wave of sadness washed over his face.

“Who are you?” she asked again.

“There you are,” Lady Branon called from the doorway, cutting off his chance to answer. “I’ve been looking all over for you.” Her breath came in exhausted gasps. “I see you’ve met Master Trilian.”

After a final glance at the strange man, Seren moved to help the old High Priestess find a seat. “You should have sent another instead of climbing those stairs.” She reached out and grasped Lady Branon’s arm to steady her, then looked up as Master Trilian took the other. His intense eyes made her stomach flutter, as together they guided Lady Branon towards a bench in one of the alcoves.

A sigh escaped the old woman as she sat with Seren on one side and Trilian on the other. “I can make the stairs for a while longer yet.” She reached out and took Seren’s hand. “Though when you leave, I’ll have little reason to.”

Sadness welled inside Seren, and she turned her head to hide the tears forming in her eyes. Though, she suspected, they mirrored those of the old lady.

Lady Branon squeezed her hand, a comforting gesture from the only mother she’d ever known.

A moment passed in silence until Seren cleared her throat and composed herself. “Now,” she said. “I assume the arrival of Master Trilian is why you’ve ventured up five flights of stairs when you know one makes you tired.” She gave Trilian a denouncing glare. “Though I can’t imagine why he’d be worth the effort.”

Lady Branon looked from Seren to Trilian and back again. “Forgive me, Seren,” she said. “I thought you knew. Master Trilian is the Emissary from Pinacia.”

Seren blinked hard. She felt as though she was tumbling head first from the tallest tower. The Emissary from the capital, from Pinacia. The man who in all likelihood would exile her, send her to her death. How could one so young be the Emissary and have the final say in which of the Chosen was sacrificed?

She studied him for a moment: the wide smile, broad shoulders and muscled chest that made her body melt and brought visions of her enfolded in his strong arms, wrapped away from danger. She shook her head. Such thoughts only came with the knowledge that he could spare her life. Even if something in his eyes made her believe he would if she asked. But she could never ask. She could never live with one of her sisters going in her stead.

“You’re early,” was all she could think to say.

“The way was clear, and the journey easy. I saw no reason to delay.” Trilian smiled at her with that look that made her feel no more than a child of ten.

She held tighter onto Lady Branon’s hand and stared at the drac-stone, unwilling to hold his gaze longer than necessary for fear of antagonising him. But the whole idea suddenly seemed ridiculous, after all, what was the worst he could do? She stood ready to give him a piece of her mind. His time might not be precious, but her’s was.

Before she could say anything, Lady Branon stood between them with her back facing Seren. “We welcome your presence,” she said. “Now you will have plenty of time over the coming weeks to talk and get to know each of the Chosen before making your final decision.”

His eyes flickered from Lady Branon to Seren. “The decision is not mine alone to make,” he said, causing the High Priestess to bristle.

“All of the Chosen are ready to follow the decision you make.”

Trailian bowed his head. “Forgive me. I only meant that I would not choose anyone who did not wish to be Chosen.”

“I know what you meant.”

Seren glanced at Trilian, her brows furrowed. She would need to speak with Ania about the Emissary. He was not what they expected.